Our first generation, Simon Schiffman greatly valued the importance of family, community and hard work - values he passed on to our second generation owner, Arnold Schiffman. 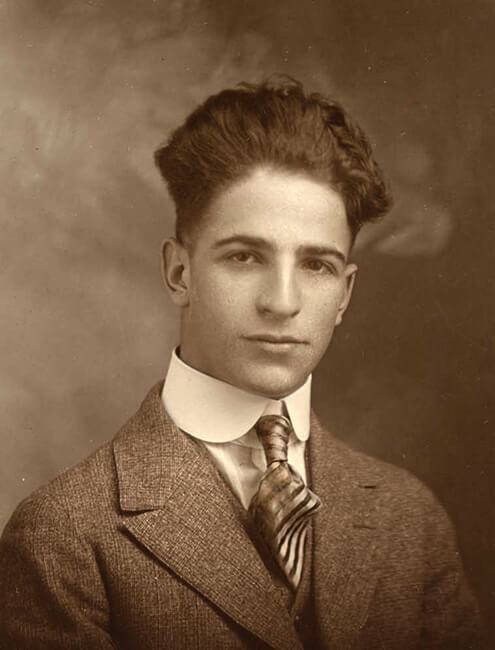 Arnold, the younger of two sons, attended North Carolina at Chapel Hill eager to follow his brother, Harold, through officer’s training school and aid the US’s effort in World War I. Unfortunately, he was not accepted and was encouraged to attend Columbia University in New York City to study mineralogy in an effort to help his family. He took to it naturally and found a calling as a gem grader. In time, he became a Certified Gemologist and a Registered Jeweler of the American Gem Society.

When Simon fell ill in 1918, he turned over the day-to-day operations to Arnold who was still finishing his degree in Chapel Hill. Guided by Simon’s belief in quality merchandise, his focus on customer service and thorough knowledge of the fine jewelry and watch business, Arnold returned to Greensboro to run the business and Schiffman’s continued to prosper. Arnold quickly became known around the industry as “Mr. A.” 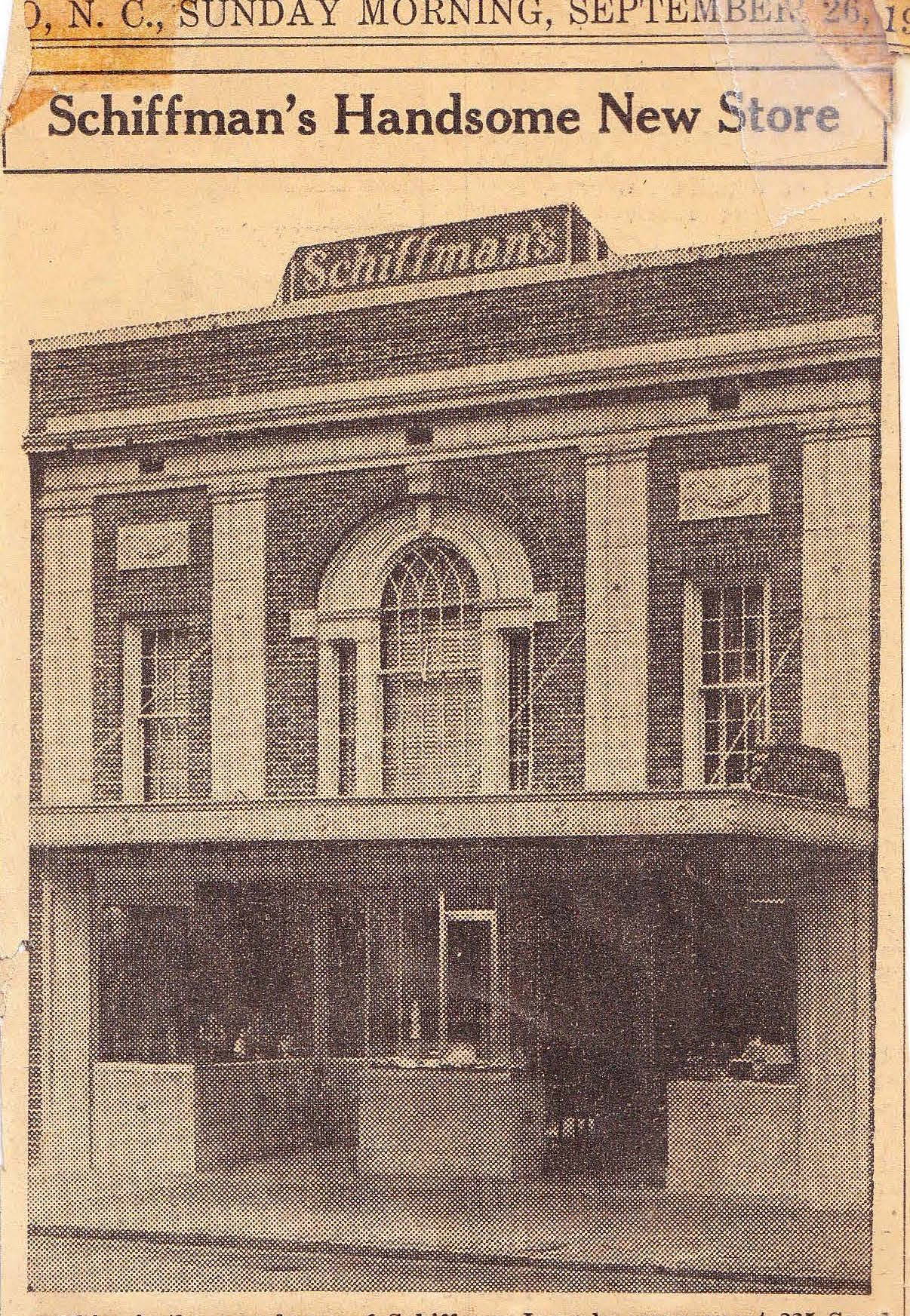 One of his first steps as new owner was to relocate the store. The city’s population was moving north and he decided to move the store with it. In 1923, a new home for Schiffman’s was built at 225 South Elm Street. To many, the store’s walnut interior and dignified setting symbolized the strength and quality of the company.

Although it was only a block from their original location (at 300), the move was considered to be a bold one at the time, as many warned “no respectable lady would walk on the same side of the street where the saloons were located.” Fortunately, their gamble paid off and the families Greensboro continued to shop with them because of the Schiffman's stellar reputation for integrity and the high caliber of their merchandise.

Arnold also put a new policy in place that continues to this day - one fair price for every customer, no exceptions. At the time, most pieces were sold by bargaining. Arnold decided to eliminate the dealing by putting on the right price and sticking to it. In fact, family lore says that on one occasion after the policy was in place, Simon cut an old customer a deal. Feeling that Simon had undermined his authority, Arnold gave him the keys and quit. When he got home that evening Uma, Simon’s wife, handed them back to him saying, “It will never happen again.”

Just as the economy was recovering from the Great Depression, the family faced its biggest obstacle yet. In August 1936, a disastrous fire destroyed the store forcing it to close for an entire year. Saddened by the loss, the family took the opportunity to rebuild an elegant, fire-proof building with all of the modern amenities.

When the new store opened in 1937, it was considered one of the most modern and beautiful of its day. Designed in the popular Colonial Revival style, customers were most impressed that the store had air conditioning. The new Schiffman’s Jewelry Co. building raised the bar for local retailers by offering modern conveniences that were first of their kind in the South Atlantic states. 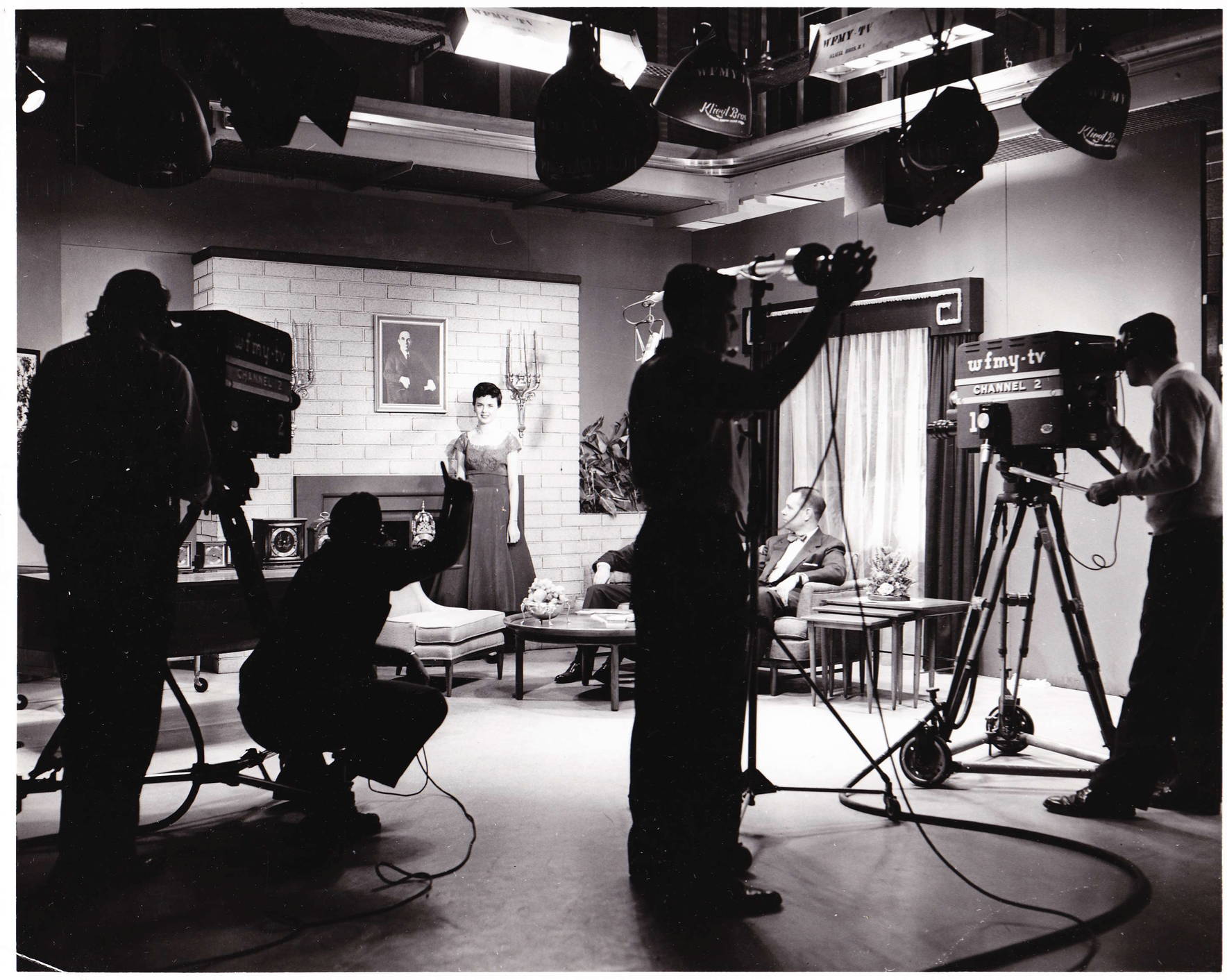 Arnold Schiffman on the set of WFMY's "Let's Visit"

Arnold strongly believed that the key to publicity success in the jewelry business is the continual education of the public. For years, he followed tradition, speaking to schools, women’s clubs, colleges, and civic groups whenever possible. Arnold hosted an informative radio show for nine years before jumping to television in 1952. He recognized the potential of TV very early on and began producing and starring in “Let’s Visit” a weekly 15-minute program. The episodes were less commercial and more informative in nature. Some provided information on topics like marriage traditions while others were devoted to the romance of stones, particularly the stories of birthstones for that particular month. “Stories from the Stones” became so successful that Arnold continued to do live broadcasts on Greensboro’s Channel 2 for ten years. 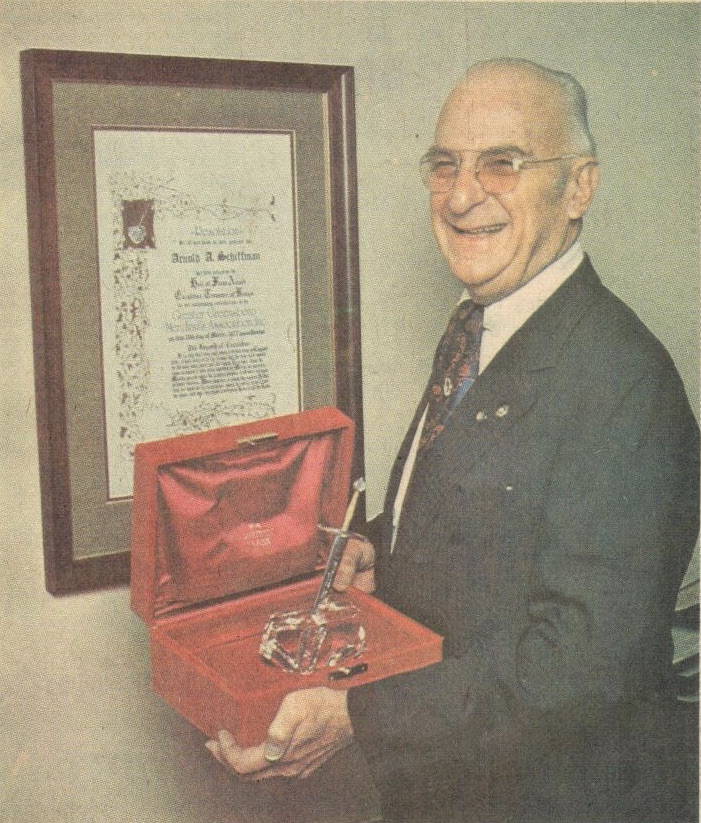 Arnold fully embraced the lessons his father taught him. As president of Schiffman’s from 1919-1964, he dedicated his time to his business, his family and to Greensboro community and professional organizations. He served as the Chairman of the Greater Greensboro Merchants Association in 1923, the president of the American National Retail Jewelers Association, the North Carolina Jewelers Association, and the Greensboro Rotary Club where he also served as a District Governor. He led a Group Study team for Rotary to Israel in 1969 was Chairman of the Greensboro Coordinating Committee for Foreign Students and John M. Morehead Commissioner.

Arnold also served as the Founding Chairman of the Greensboro Evening College, the Chairman of the Executive Committee, the Guilford College and as the Director of the Greensboro Chamber of Commerce. He was one of the men responsible for the establishment of the downtown division of Guilford College. Chairing a fund drive to raise $22,500 from private donors, and donating his parent’s 3-acre property on Spring Street to the college.

In 1956, Arnold’s artistic talents were recognized by the jewelry industry when he was awarded the Diamond USA Award for his Queen of Hearts - Diamonds Clip and a diamond and emerald ring. The Queen of Hearts diamond clip is now part of the Greensboro Historical Museum collection and is part of a permanent exhibition about the history of Greensboro. 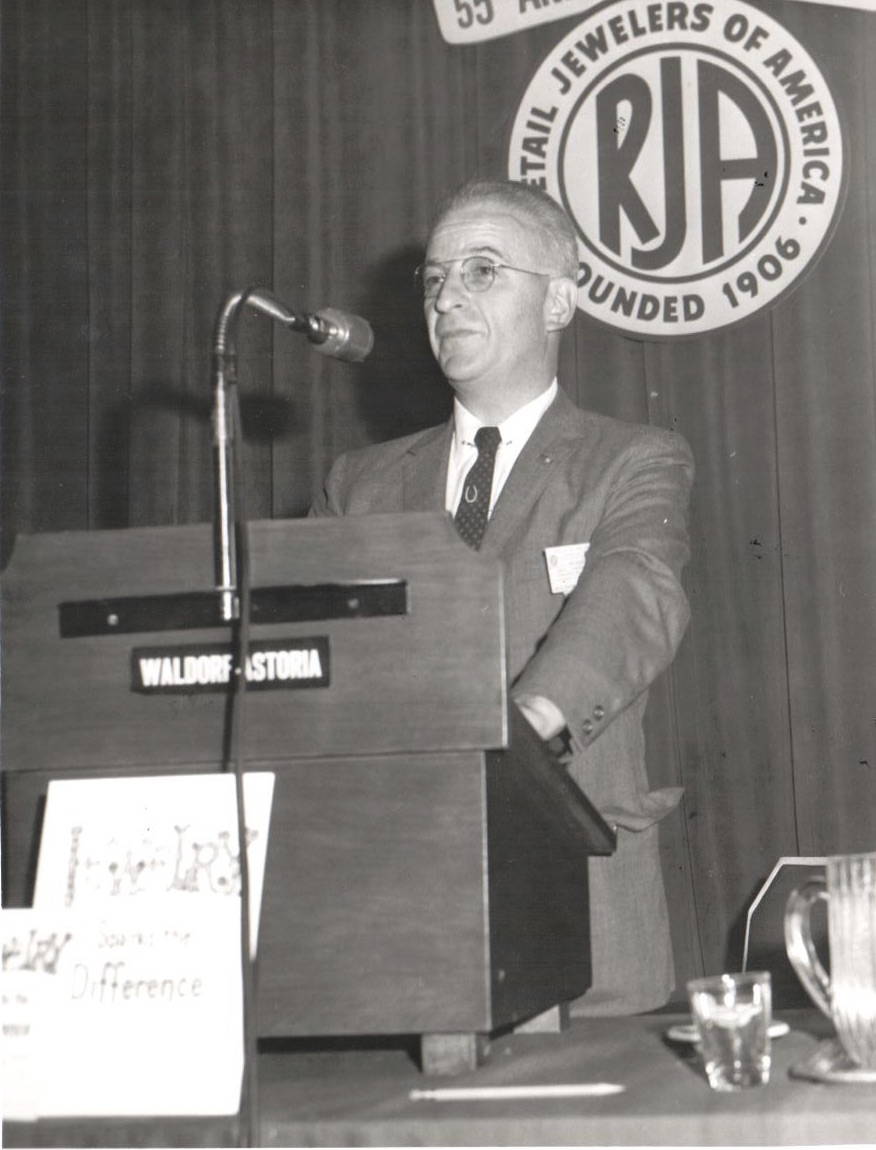 Arnold Schiffman as the President of the Jewelers of America

Through the years Arnold’s contribution to the retail jewelry industry and the Greensboro community, were recognized by his colleagues. He was named the North Carolina Merchant of the Year in 1958, presented with the Retail Hall of Fame Excalibur Award of Greater Greensboro in 1977 and received the DAR Metal of Honor 1987.

When asked about his extensive community efforts, in an article published in the January 1979 issue of JCK magazine he simply said “certainly a person should do what he is capable of in his community.”