Watchmaking as an art has evolved dramatically over the centuries. From large simple pocket watches to exceptionally thin complex wristwatches, the forms of timepieces have been many throughout the years. There are always upgrades, but few manufacturers are able to boast multiple innovations as part of their history. One of those brands is OMEGA, and today, we'll take a look at five watches that changed our history and theirs. 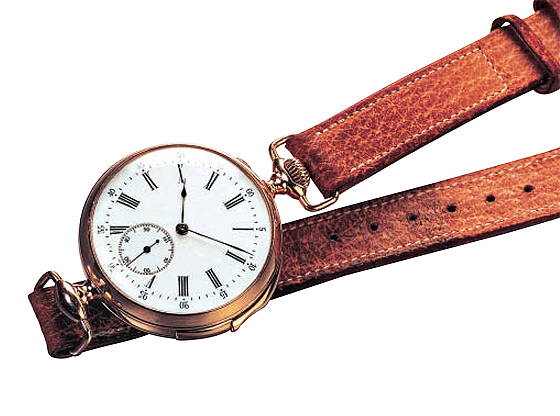 The first minute-reapeater was unveiled in September 1892 by Louis Brandt & Frére, the predecessor to today’s OMEGA, in Bienne, Switzerland. Louis Brandt & Frére chose Audemars Piguet to modify a 13-ligne Lépine ébauche that Audemars had acquired from LeCoultre & Cie. This unique wristwatch strongly mirrored a pocket watch in case size but featured a wrist strap attached to two pillars at twelve and six. The striking timepiece’s mechanism was triggered by a slide at 3 o’clock. The simple face was adorned with roman numeral hour markers and Arabic numerals placed in miniature above the minute markers.

The dust cover was engraved with a French saying which translated to “Excluded from the competition: juror, Paris 1889”. César Brandt, who ran the manufacturing firm with his brother Louis-Paul, served on the jury of the Paris World’s Fair in 1889, likely excluding the timepiece from the competition for medals in Paris because of his connection. 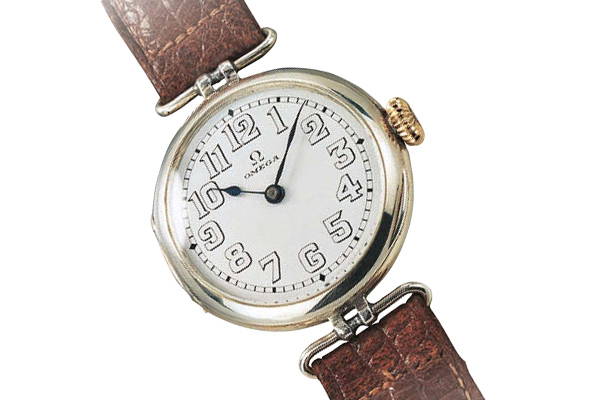 The next major milestone for OMEGA occurred in 1900, when the first wristwatches bearing the Omega name were manufactured for use by British officers in South Africa’s Boer War (1899 -1903). With this introduction, the company became one of the first firms to begin serial production of watches.

These first wristwatches were noted for having the ability to withstand rough treatment they received from wear on the battlefield. An advertisement in a 1904 watchmakers’ magazine detailed the testimony of a British artillery officer, that it performed exceptionally in frigid cold, unbearable heat, pouring rain, and unforgiving sandstorms. The lieutenant colonel stated in summation that “The wristwatch is an essential campaign element”. 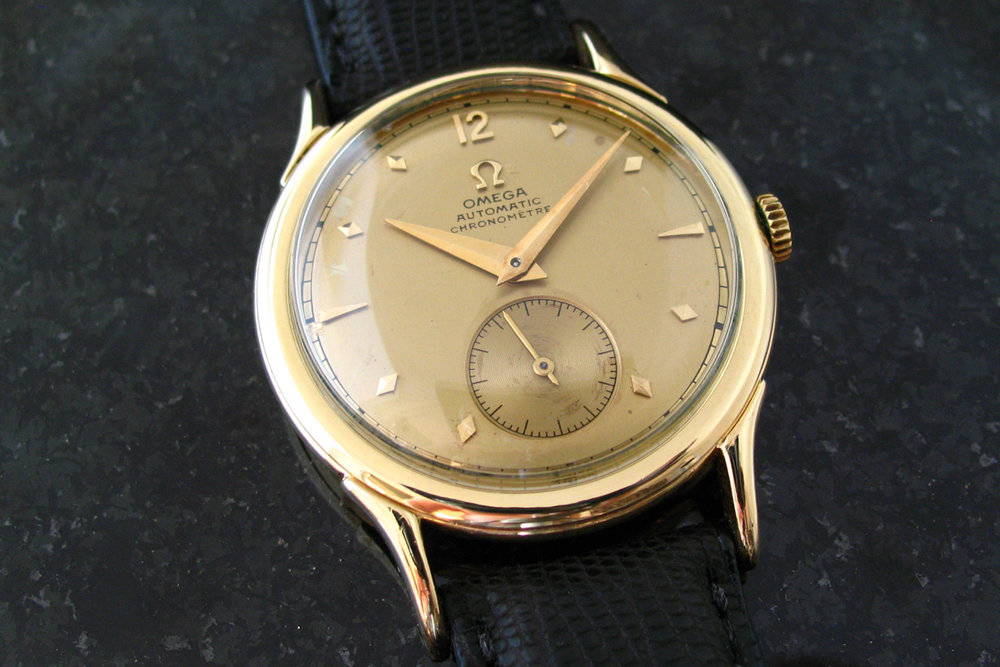 OMEGA began using the name “Constellation” in 1952 to refer to their officially certified wrist chronometers. The 28.1mm diameter by 5.4mm thick movement passed all official chronometer tests with flying colors. Sturdiness, reliability, and precision led the brand to begin producing the Constellation in large quanities.

The Constellation became OMEGA’s first serially produced chronometer timepiece. The premier model of the Constellation was powered by a Caliber 28.10 RA SC PC RG AM movement. Nicknamed “352”, the movement first appeared in 1945 for OMEGA and wound itself via a unidirectional hammer-type winding weight. The innovation of the Constellation paired with the clean lines of the watch face make this timepiece a true OMEGA classic. 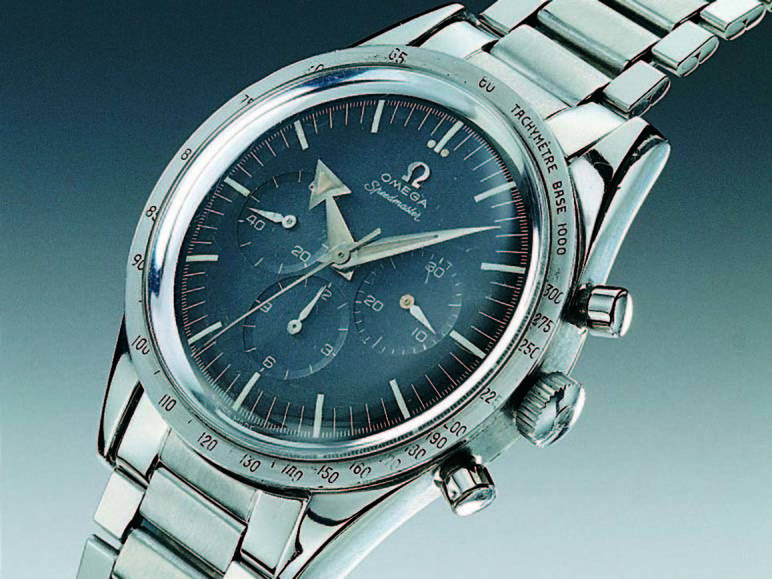 Rarely in the realm of watchmaking can a manufacturer lay claim to the most famous timepiece in the world. OMEGA can proudly boast the most famous chronograph on the planet (and beyond) with the Speedmaster. Welcomed in 1957, the OMEGA Speedmaster was sought out by NASA for use in the Apollo space program. The Speedmaster is quite possibly the most well-known chronograph in the galaxy, but its origins begin well before it was catapulted into outer space.

Jacques Reymond engineered a chronograph in 1943 which he called Caliber 27 CHRO C12. Reymond was born into a long family line of watchmakers and had begun his career at Lemania, a subsidiary of OMEGA, the year prior in 1942. The “CHRO” in his caliber designation represented the term chronograph, with the “27” referring to the diameter in mm of the movement. “C12” stood for the additional counter (for 12 elapsed hours).

The Reymond movement was further engineered by Albert Piguet in 1946 and, at the time, was the smallest of its type. Lemania was also responsibe for the original case design of the Speedmaster which was created by designer Claude Baillod, prototype-maker Georges Hartmann, and machinist Désiré Faivre. The original Speedmaster featured a 39mm diameter case in 1960. It also featured a black dial, luminous hands, a tachymeter scale, water-resistant case, screwed back, and domed Plexiglass crystal. 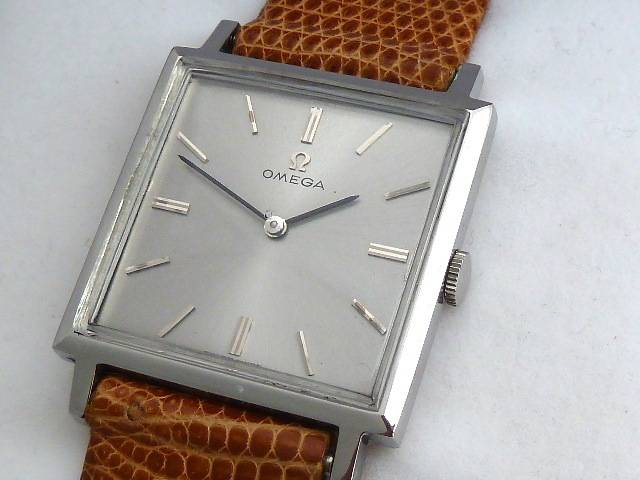 Launched as a separate line in 1967, the OMEGA De Ville was originally part of the Seamaster collection originating in 1960. The De Ville quickly became OMEGA’s best-selling line because of its simple, modern, colorful and varied composition (in comparison to the Seamaster). The collection was inspired by a new era of urban sophistication. Rather than being manufactured in Bienne, the De Ville was assembled in Geneva. The entire philosophy of the De Ville was the new aesthetic, capitalizing on modernism in wristwatch design.

The De Ville collection included rectangular models which were powered by the ultra-slim hand-wound Caliber 620 movement. This merging of innovation and tradition was the perfect balance for the company. De Ville wristwatches won six “Golden Roses” at the Baden-Baden design awards during the 1970s. OMEGA was also awarded the sought after Grand Prix Triomphe de l’Excellence Européenne for the De Ville timepiece. Modern De Ville timepieces continue to exude the same spirit of watchmaking elegance and timeless design.

While there are numerous other examples, we hope that our journey through five of OMEGA's most historic watches has taught you a little something new about one of the most iconic brands in the galaxy.

Explore the entire modern OMEGA collection with our experts at our Friendly Center and Winston-Salem locations.