Think about the rarest thing you have every seen. Maybe it was a wild animal, a secret geographic location, or a rare piece of art or sculpture. For most of us, these glimpses of a singularity are unique to us but could actually be sought out by most people. For the crew of Apollo 8 during their 1968 space mission, the experience they lived through was truly rare. 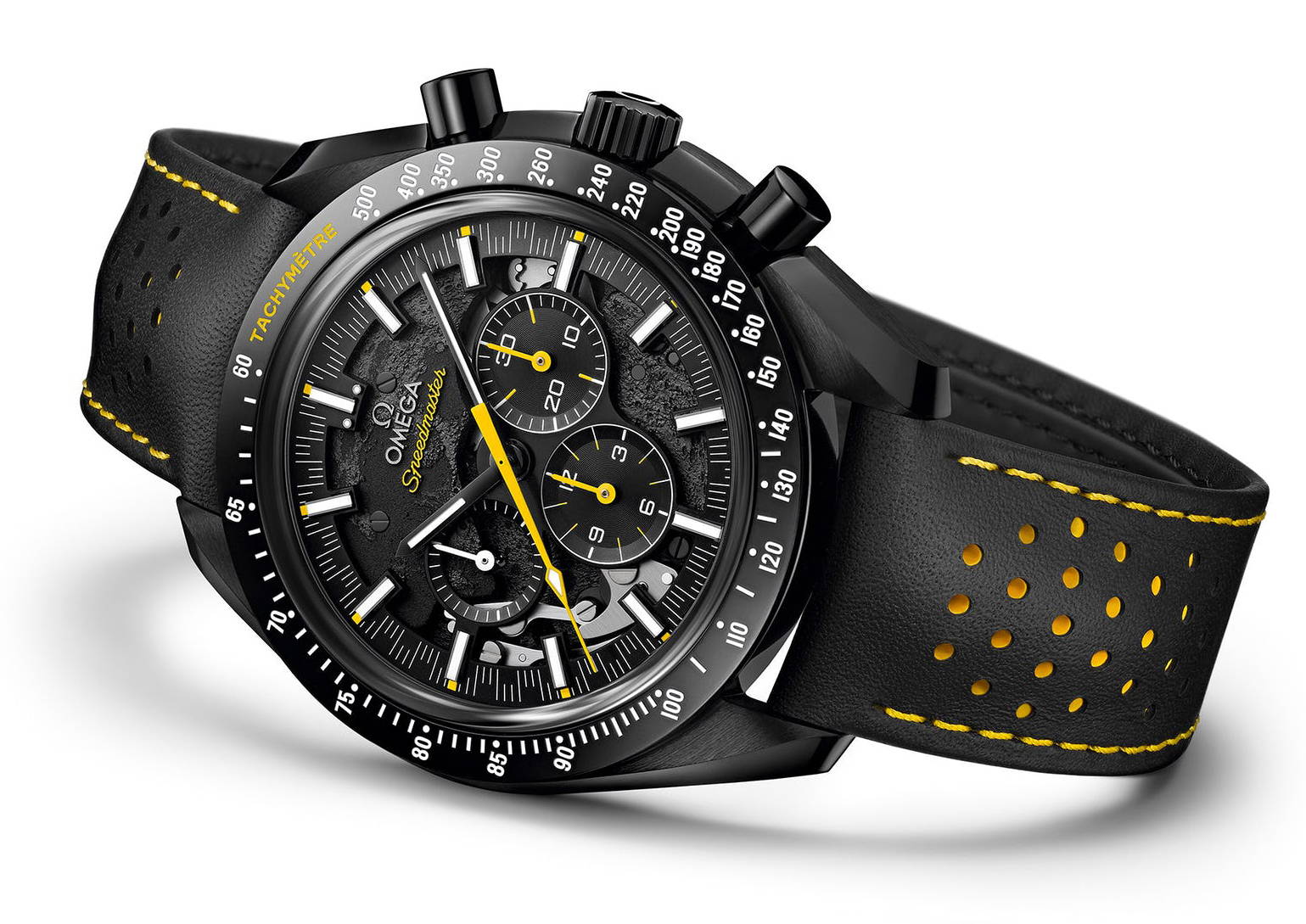 Apollo 8 was the first space mission to complete an orbit of the moon. On December 8, 1968, the crew of Apollo 8 visited the “Dark Side” of the moon. One commemorated by Omega with their “Dark Side of the Moon” Skeletonized Apollo 8 timepiece. Omega has produced a “Dark Side” watch since 2013, when they released an all-black Speedmaster with a full ceramic case. Over the past several years, there have been minor changes to the timepiece, but no drastic updates. In commemoration of the 50th anniversary of the Apollo 8 mission, Omega once again ventured to the “Dark Side” in 2018 and released a Speedmaster with substantial changes.

Equipped with the same 44.25mm black zirconium oxide ceramic case that we have seen on previous Dark Side models from Omega, at first glance the Apollo 8 would seem to be business as usual. Beyond the case though, things diverge quickly from the previous editions, and Omega presents us with some truly unique. The Apollo 8 presents a skeletonized dial which is imprinted with a representation of the lunar surface. Bright yellow accents offset the darker overall appearance. The Apollo 8 is powered by a special version of the hand-wound Omega 1861 movement, outfitted with black bridges which have the appearance of being cut out of lunar stone. 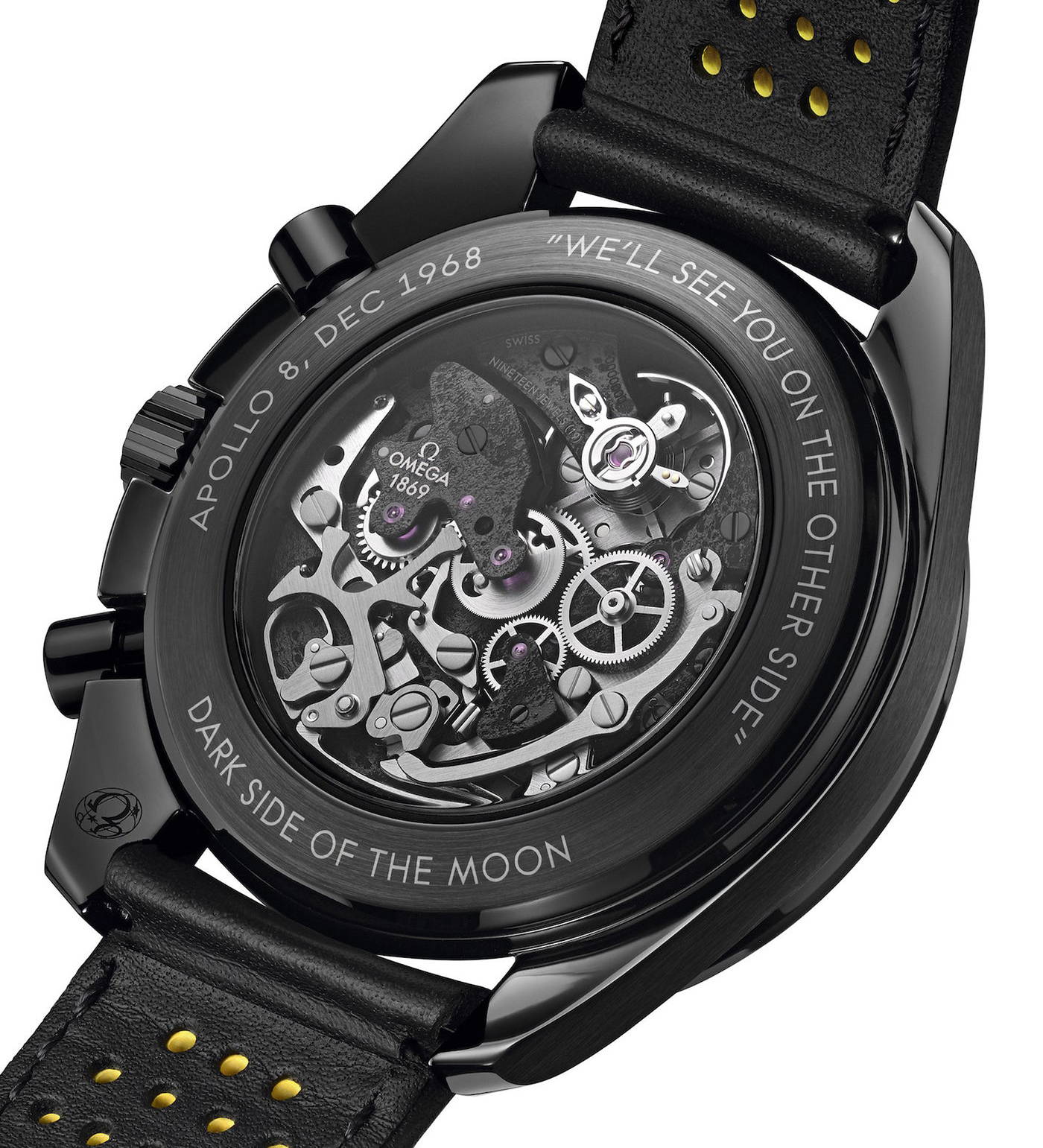 Dark Side of the Moon models have typically used Omega’s 9300 co-axial column wheel chronograph movement. The more traditional Caliber 1861 movement used in the Apollo 8 lends a special appeal. With the added black bridges, Omega is referring to the movement of Apollo 8 as the Caliber 1869. The Caliber 1869 powers the timepiece and the three sub-dials of the 12-hour chronograph, a departure from the previous Dark Side collection pieces which have only two sub-dials.

Each of the sub-dials appears to be floating over the lunar surface face of the watch, and occupy the three, six, and nine o’clock positions. There is no traditional date window on the Apollo 8. Use of the Caliber 1869 movement allowed Omega to shave 2.5 mm off the thickness of the new Speedmaster, which matters immensely in a watch that measures 44.25mm in diameter by 13.8mm in height. The slimmest profile for a Dark Side of the Moon edition yet allows the Ceramic case to sit low on the wrist, making the larger timepiece comfortable for day-to-day wear. 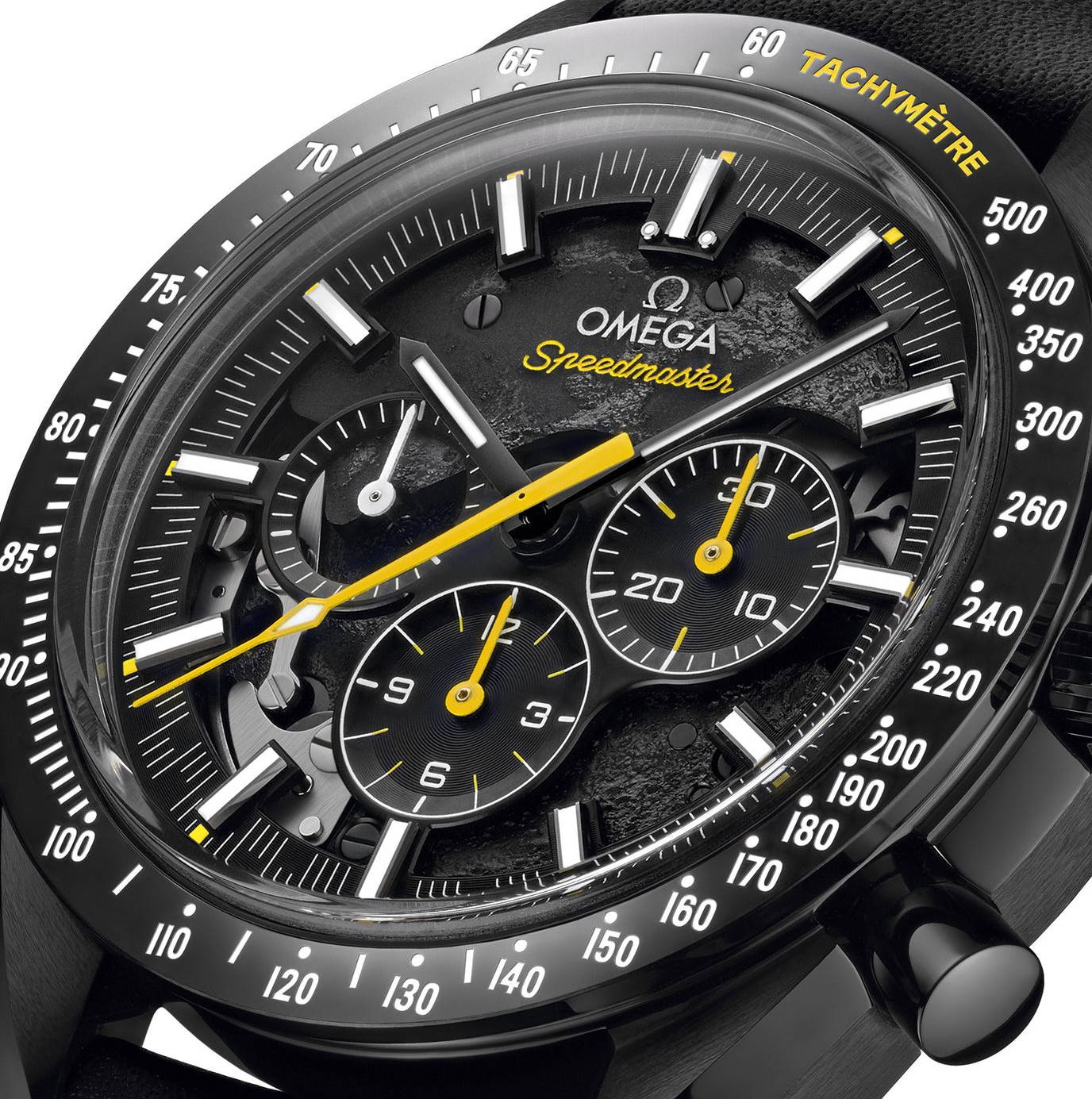 Yellow accents mark the seconds hand and the minute and hour sub-dial hands, as well as the hour markers. The yellow prominences continue with both the Speedmaster designation on the face and the Tachymetre notification on the dial. The band is perforated black leather with yellow accents and is finished with yellow stitching. Super-LumiNova on the hands and markers guarantee legibility in low light. The Speedmaster Dark Side of the Moon Apollo 8 features a 48-hour power reserve and 50 meter water resistance.

Perhaps the most noticeable feature of the timepiece has nothing to do with the movement, color, or design. Engraved on the back of the Apollo 8 is an inscription denoting the accomplishments of the Apollo 8 crew in December 1968. The quote from Command Module Pilot Jim Lovell before he dropped radio contact with Earth for the 34 minutes that his crew traveled to the dark side of the moon, “We’ll see you on the other side”.

Want to See the Apollo 8 in Person?

Unfortunately, the Apollo 8 isn't available in stores yet but you can see the rest of Omega's "Dark Side" collection at our Winston-Salem and Friendly Center locations. Tell one of our staff members you are interested in the new Apollo 8 and we'll let you know when it is available.